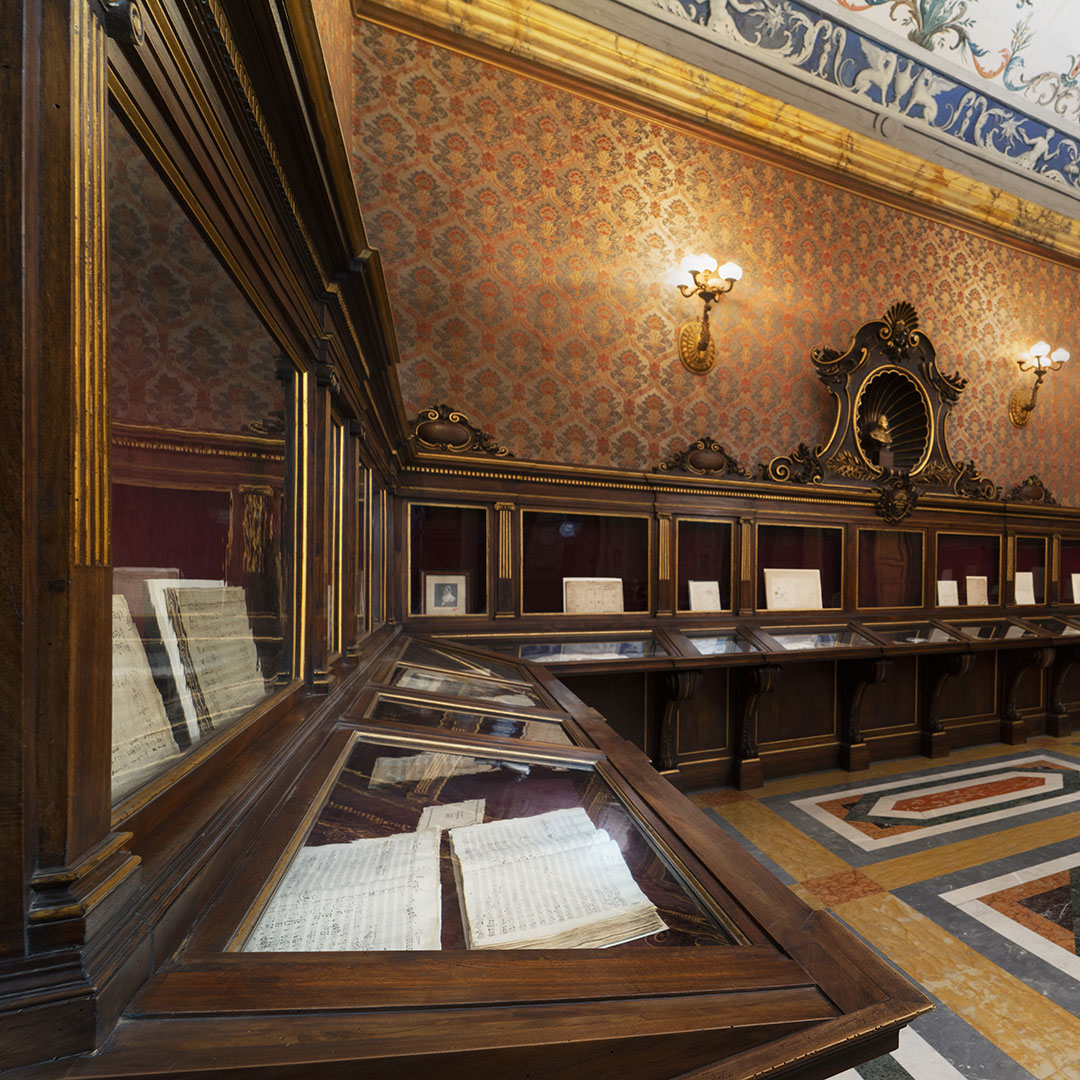 The Tempietto Rossiniano is located in the eighteenth-century Palazzo Olivieri owned by the Rossini Foundation, purchased using part of the inheritance that Gioachino Rossini left to the city of Pesaro which he had named his universal heir.

The palace was frescoed by Gian Andrea Lazzarini (1710-1801), a painter from Pesaro and by his pupils who depicted the birth of the community of Pesaro and other relevant historical events in the room preceding the Tempietto Rossiniano (known as the Sala dei Marmi).

An interesting detail can be admired, what looks like real marble is actually the result of a particular technique that uses scagliola mixed with colour.

The Petite Messe Solennelle, which bears a famous ironic dedication to the “Buon Dio”, was written when Rossini was in Paris in 1863. At one time it was preserved here in its piano and orchestral versions. Today the autograph is displayed at the Rossini National Museum in Pesaro.

The entire corpus of the Péchés de vieillesse can also be seen – chamber compositions that Rossini wrote in the last part of his life and destined for his own musical salon.

Among the other manuscripts there is one purchased by the Banca delle Marche which represents Rossini’s oldest theatrical autograph. It contains an aria to be included in an opera by Luigi Mosca according to a nineteenth-century custom practised by Rossini, especially in his early years. The autograph manuscript “Il voto filiale”, a small cantata that Rossini composed in Naples in 1820 for Francesca Gnecco, daughter of the impresario Emanuele Gnecco. The well-preserved autograph consists of a few pages without any corrections.

There is also one of the album sheets that Rossini used to reserve as a cadeau for friends and admirers, “Mi lagnerò tacendo” signed and dated “Gioachino Rossini 1850, Firenze”, received on deposit by the Municipality of Pesaro, thanks to the generosity of its owner, Ing. Carlo Damerini. 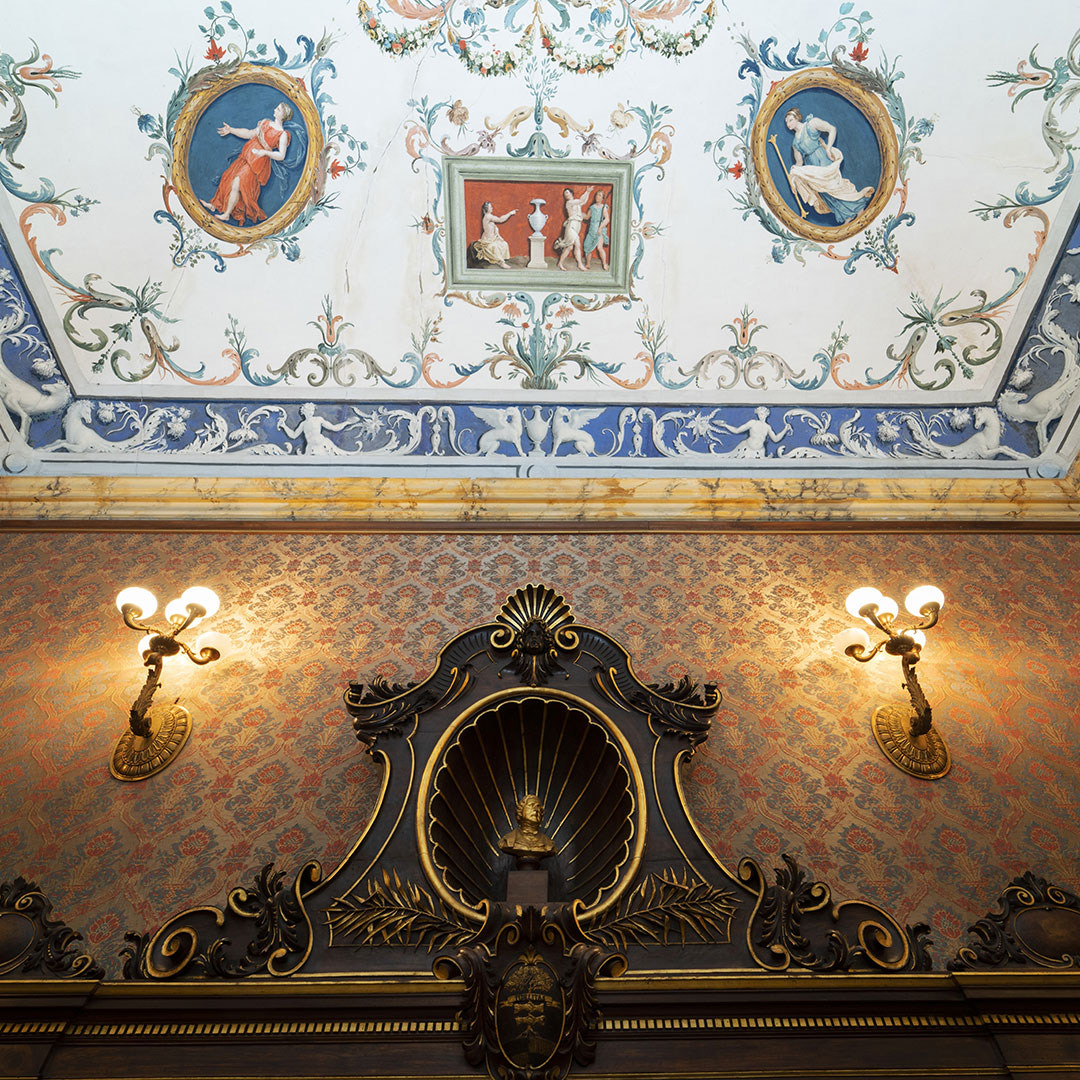 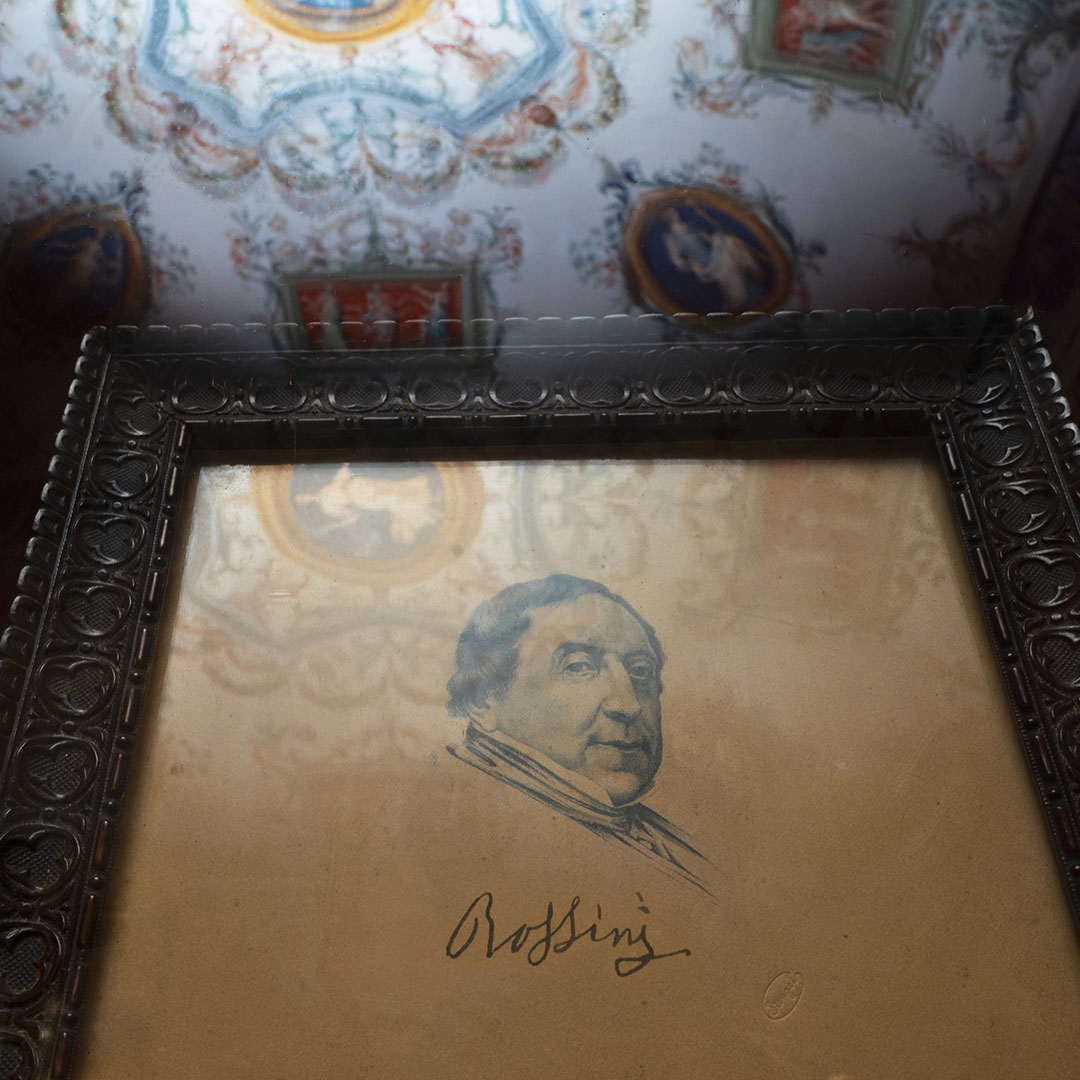 To those were added:

– the Rossinian autographs from the Lord Saint Davids purchased with the competition of public and private institutions;

– letters addressed to his parents;

– other letters that testify to Rossini’s activity as the main person responsible for running the Théâtre Italien in Paris and provide interesting details on the relationships and exchange of artists between the Parisian theatre and the Teatro di San Carlo in Naples.

A special sector is dedicated to the numerous honours that Rossini received during his life, from sovereigns, governments and associations all over the world, now on display at the Rossini National Museum in Pesaro.

Letters and pictures of Rossini and his parents are kept in the upper part of the showcases.

At one time, the left wall displayed Gustave Doré’s painting of Rossini on his deathbed; it is presently on show in the Rossini National Museum in Pesaro.

Adjacent to the temple there is a frescoed study with decorations inspired by religious themes, alluding to the pacification between men and God after original sin and the civil exaltation of peace and justice.